I am back reviewing my beloved YA today with The Boyband Murder Mystery by Ava Eldred. Many thanks to Ava, and to Penguin Random House, for my copy of the book, which I received via NetGalley.

‘I have long believed that loving a boyband brings with it a wealth of transferable skills, but I’d never imagined solving a murder would be one of them…’

Harri and her best friends worship Half Light – an internationally famous boyband. When frontman Frankie is arrested on suspicion of murdering his oldest friend Evan, Harri feels like her world’s about to fall apart. But quickly she realises that she – and all the other Half Light superfans out there – know and understand much more about these boys than any detective ever could. 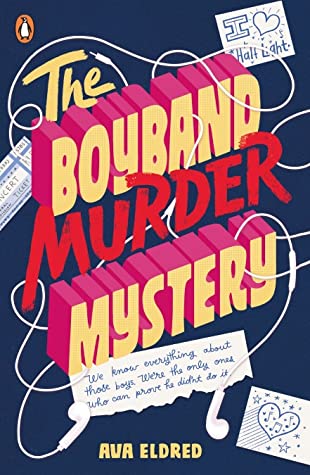 I was a big boyband fan in my younger years, and I think it was feelings of nostalgia relating to this that led me to pick up this book. Social media wasn’t a thing back then though, so it was just me and my friends obsessing in our bedrooms.

Although Harri is hard to like at times, I enjoyed her friendship with Jas and can fully understand that feeling of having such a close friendship with someone you have never met and being nervous of not being enough when you finally do meet. The network of virtual friends that form the basis of this book put me in mind of my own posse of kindred spirits from the book world.

The Boyband Murder Mystery is more a story of what we can achieve through strong friendship and love than a real murder mystery but I loved it for that, and it was the characters relationships with each other that really made this book for me. I found it to be a relatively lightweight, fun read, which actually sometimes is exactly what you need to escape from the world.