As part of the blog blitz for Trials & Tribulations of a Pet Sitter, Laura Marchant is kindly letting me share an extract of the book with you all – many thanks for this Laura. Thanks also to Rachel Gilbey at Rachel’s Random Resources for inviting me to take part in the tour.

Hilarious and heart warming true stories of a Pet Sitter.

​Laura takes us on her journey describing the immense joy that the animals have brought into her life. But it’s not all fun and games. With sometimes as many as ten dogs around her home, things can get a tad hectic. Not to forget the every day challenges faced in keeping the pets happy and safe when out walking. Luckily she is not alone in her quest; her unusually dominant Golden Retriever ‘Brece’ is always by her side. Brece earns her keep by convincingly playing the part of the alpha female, ensuring harmony amongst the pack.

​At times, the responsibility that Laura faces becomes overwhelming. She may think she has everything covered but that hand of fate could quite easily swoop down, creating havoc for her and the dogs. Laura has endured many close calls and teetered on the precipice of disaster may a time. The longer she continues with her pet sitting enterprise, the more likely hood that total disaster will actually strike. Is she tempting fate?

​Laura Marchant is the Bridget Jones of the pet sitting world! 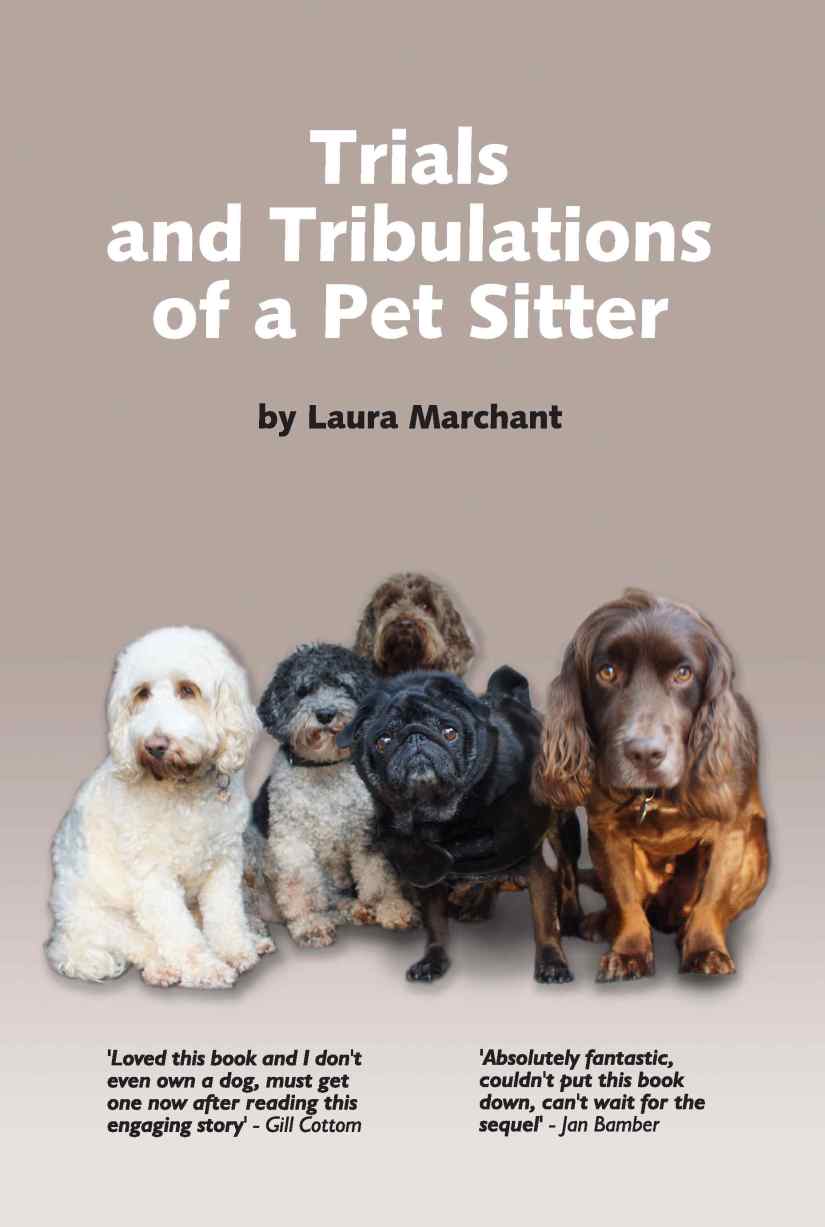 I started referring to my car as the Ark; a means for transporting the animals two by two. Needless to say numerous disasters have occurred within the confines of the Ark. The incident with ‘Jess the Weimeraner’ was one of the most worrying, yet hilarious at the same time;

On occasions, and not surprisingly, there has been the odd bit of drama played out within the confines of the Ark, that required an industrial cleaning operation. One such incident stands out above the rest; it involved Rocky, and Jess an unspayed young Weimaraner, another dog that I had inherited from Carol. During a phone call Carol informed me that although she was due to board Jess, she had found herself in a position where she had more dogs than she could manage- cue me. Consequently, I naively agreed to take Jess off her hands and that was without ever having met the dog before,  but at the time Carol was desperate and I felt obliged. The fact that Jess was unspayed was a concern to me especially as Rocky was still intact. Although Brad had said that he was going to get Rocky castrated, he had not actually got round to getting it done. Personally I think he found the whole notion off putting. However, Carol had been assured by the owner that the fact Jess was unspayed would not be a problem, as she was nowhere near her next season. A recipe for disaster if ever there was one!

Jess checked in. From the word go she was extremely hard work, all the negatives of bad dog behaviour rolled into one; strong, extremely boisterous, out of control and not responding to any commands. Brece was not in the least bit amused. Jess is the type of dog that would never pass her vetting process had she not slipped under the radar. It was regrettable that I had ever agreed to look after the crazy Weimaraner; I couldn’t help thinking that somehow, I had been stitched up like a kipper!

To set the scene it was a warm day, late 2011, unusually warm for the time of year. I had herded the dogs into the Ark ready for our morning walk. Brece jumped into her usual position of the front foot-well, then I opened the back door and Jess jumped in, rapidly followed by Rocky who seemed very keen to be in Jess’s company. After which, I got myself into the driving position. Before I had even put the keys into the ignition a fracas broke out behind me, a hell of a scuffle had erupted. Quickly turning around, I caught sight of Rocky trying to hump Jess in a most determined manner; utter disaster in the confines of the Ark!

Jess must have come into her season, or about to, which meant that the owner had either misled Carol or just got the timings wrong, and indeed timings can go awry. The thought of Jess’s condition made me feel queasy, especially when the recollection of her standing on top of my dining table like some sort of mountain goat, popped into my head, gross. The whining and wailing from Jess grew louder, she was clearly in distress. There was no way I could have them ‘locking’, the thought of a litter of mini Rocky’s on the planet did not bear thinking about. It certainly wasn’t going to be an easy job to separate the pair, a serious task lay ahead of me. Still sat in the driver’s seat I contemplated on how to resolve the situation.

I peered down at Brece in the front foot-well, hoping for some sort of inspiration. On this occasion, she failed to come up with the goods, but she did come up with something else. Looking up at me with her big doleful eyes she produced a massive rasping burp, then proceeded to vomit across the interior of the car. In true Jackson Pollock style, the sick splattered all over the passenger seat, the floor and inside the usual nooks and crevices of a car. To make matters worse the vomit was not your usual consistency. It was thick, greyish in colour and extremely pungent, as if she had hauled it up from her bowels.

This was all I needed, but I couldn’t allow myself to be side-tracked by Brece’s tummy upset, my priority at that moment was to get Rocky off Jess. Jumping out of the car I opened the back door and was relieved to see that the odd couple had not yet consummated their marriage, but it was not for the want of trying on Rocky’s part.

With the door ajar, Jess saw her opportunity to escape and charged out of the vehicle before I had chance to grab her. At breakneck speed she ran off down the centre of the road, obviously not too enamoured with Rocky as a potential suitor. Thank God there was no traffic about. In rapid succession I chased after her. Of course, there was no way I was going to catch up with her, she was running with the speed of a Greyhound. Then a spot of good luck came my way; Sean, my friendly postman happened to be walking along the pavement halfway down the road and ahead of Jess;

I was frantic by this time. Without considering the risk to himself, Sean gallantly charged into the middle of the road and managed to catch Jess by the collar. Definitely beyond the call of duty. My marvellous postman managed to keep hold of her until I reached him and relieved him of his extra duties.

Prior to being someone entrusted to look after people’s pets, I hadn’t given too much thought to the role of the postman. But now I look at Her Majesty’s servants in a different light. They have quite a lot on their plates; often having to run the gauntlet of being chased off properties by protective dogs, good in a crisis and always happy and affable when going about their duties, even in torrential rain. I now have a new-found respect for our friend the postman.’

Laura Marchant was born in 1959 in the seaside resort of Lytham St Annes, Lancashire, England. Both her parents were born in the same town, so not exactly a family of intrepid travellers! As a child Laura and her siblings were fortunate enough to own shares in the families pets. Unbeknown to Laura at the time, her love for the animals formed the blueprint for a large part of her life. In 2011 she finally found her vocation, and in the comfort of her own home, set up a pet boarding business. For the next 7 years she shared her abode with a pack of dogs. A lot of this time was spent watching over the animals and observing their behaviour, which in turn inspired her to write her first novel ‘Trials and Tribulations of a Pet Sitter’.