Happy book birthday to Aaron Hodges and War Bringer, and welcome to Aaron who has written a fascinating guest post for us today. Many thanks to Aaron, and to Rachel at Rachel’s Random Resources, for inviting me to be a part of the birthday celebrations.

Centuries ago, the world fell.
From the ashes rose a terrible new species—the Tangata.
Now they wage war against the kingdoms of man.
And humanity is losing.

Recruited straight from his academy, twenty-year-old Lukys hopes the frontier will make a soldier out of him. But Tangata are massing in the south, and the allied armies are desperate. They will do anything to halt the enemy advance—including sending untrained men and women into battle. Determined to survive, Lukys seeks aid from the only man who seems to care: Romaine, the last warrior of an extinct kingdom.

Meanwhile, the Queen’s Archivist leads an expedition deep beneath the earth. She seeks to uncover the secrets of the Gods. Their magic has been lost to the ages, yet artifacts remain, objects of power that could turn the tide of the war. But salvation is not all that waits beneath the surface. Something else slumbers in the darkness. Something old. Something evil.

Now I will hand you over to Aaron to talk about plotting versus pantsing in fantasy writing (which is perhaps the perfect guest post for me at the moment!)

They say there are two types of writers—plotters (those who carefully plot out every detail of their novel before writing a single word) and pantsers (those who make things up as they go along). in my experience in discussions with my author friends, I’ve found this to be more or less true, with the exception that its less of a duel choice and more of a continuum between the two.

Certainly, there are elements of epic fantasy novels spanning multiple characters and grand plot arcs that are likely to require a certain amount of plotting before hand in order to create a coherent story. That’s not to say it can’t be done—if I’m honest, most of my first trilogy was written while I was pantsing in my early days as a writer. However, that series required a lot of rewriting when the time eventually came to publish it, in order to remove dues ex machina scenes and create a more cohesive plot.

For my later series I’ve managed to find what I think is a good balance between plotting and pantsing. I usually by a pantsing mind map session in which I put down every interesting scene I can think of that might fit into the realms of my story. This usually takes place over the course of a week and I’m always having to jot down ideas on the go, as you never know when one will come to you! After that, I then begin to connect the dots, so to speak, and work out what order the scenes come together. Once I have a skeleton of a plot in place, I’ll start to write outlines for each chapter/scene in the story that will help trigger my writing in the coming months.

At the point I have about two thirds of my chapters outlined, I begin to feel confident about starting to write. On the first draft, while I have those outlines to follow, I often find myself veering off-track because of plot points that didn’t work or characters that develop a life of their own (I’m serious, some of my characters over the years have been a real pain!). For this reason, I generally write my first draft as quickly as possible and don’t worry too much about details in this early version—as often chapters will need to be completely rewritten or even deleted in later drafts.

Which brings me to the second draft. By this point I have usually developed a good understanding of my main characters, so I am able to return and rewrite earlier chapters to ensure a clean plot arc throughout the book. I’ll also add in more important details, names (sometimes I just leave them blank in the first draft!), and settings

Once the second draft is complete, I send it off to my editor who finds all my repeated words and incorrect grammar, before I go over it one more time myself. In the third draft I am mostly just polishing sentences and paragraphs to make sure they flow, as well as hopefully catching spelling mistakes—although my proofreader and ARC readers then have one last read over the manuscript to catch the last of these.

And walluh, I have a complete book!

When I’m working full-time, all of that generally only takes me 3 months from start to finish. 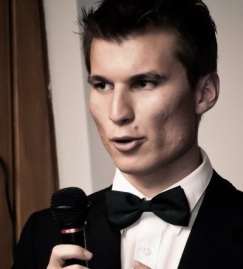 Aaron Hodges was born in 1989 in the small town of Whakatane, New Zealand. He studied for five years at the University of Auckland, completing a Bachelor’s of Science in Biology and Geography, and a Masters of Environmental Engineering. After working as an environmental consultant for two years, he grew tired of office work and decided to quit his job and explore the world. During his travels he picked up an old draft of a novel he once wrote in High School (titled The Sword of Light) and began to rewrite the story. Six months later he published his first novel, Stormwielder, and hasn’t looked back since.