I read A Discovery of Witches some time ago, but for some reason I didn’t read the rest of the trilogy. As I was all up to date on my blog tour reading in December, I thought I would treat myself to a binge read of all three, followed by a duvet day watching the TV adaptation (which I had been avoiding until I could read the books, just in case anything from book two popped up in season one).

If you are all sitting comfortably, here is what I thought of each of the books.

A DISCOVERY OF WITCHES

Deep in the stacks of Oxford’s Bodleian Library, young scholar Diana Bishop unwittingly calls up a bewitched alchemical manuscript in the course of her research. Descended from an old and distinguished line of witches, Diana wants nothing to do with sorcery; so after a furtive glance and a few notes, she banishes the book to the stacks. But her discovery sets a fantastical underworld stirring, and a horde of daemons, witches, and vampires soon descends upon the library. Diana has stumbled upon a coveted treasure lost for centuries-and she is the only creature who can break its spell.

Honestly, any book that starts with a library in Oxford is an instant hit with me. Add in a hint of magic, and I am in love. I have visited Oxford on a couple of occasions, but this book made me yearn to spend more time there discovering the streets, museums and libraries.

It is not always the bog dramatic scenes that make a book, and certainly in this case it was the smaller things that kept me coming back for more. I particularly enjoyed the simplicity of the scene that sees a vampire and a daemon sharing confidences over a game of chess. In fact, the message of acceptance that is shown throughout the book through the coming together of the different creatures is really what gives this book it’s heart.

This is a big book, and there is lots to love about it, but my particular favourites were the Bishop house, with its unique personality, and Marcus who I adored at first sight. I am very much looking forward to reading his story in Time’s Convert. 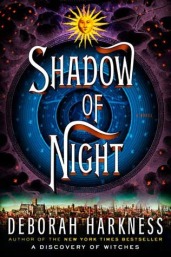 Picking up from A Discovery of Witches’ cliffhanger ending, Shadow of Night takes Diana and Matthew on a trip through time to Elizabethan London, where they are plunged into a world of spies, magic, and a coterie of Matthew’s old friends, the School of Night. As the search for Ashmole 782 deepens and Diana seeks out a witch to tutor her in magic, the net of Matthew’s past tightens around them, and they embark on a very different—and vastly more dangerous—journey.

I think of all the books in the trilogy, this one is my favourite. I absolutely adored travelling back to Elizabethan England and meeting all of Matthew’s School of Night friends. So many famous names from British history gathered together in one place made my inner historian very happy indeed.

Viewing the Elizabethan era through an outsider’s eyes, and learning how to behave as Diana was learning put a very different perspective on things than your normal historical novel, and it made for extremely interesting reading.

I’m not sure about Diana, but Deborah Harkness acts as a timespinner herself with this book, the way she weaves what is happening in 1590 with its modern day effects. She handles what could be a very complicated web with skill. The little snippets throughout the book, things like Marcus and Ysabeau tracking down artefacts, worked really well to keep the reader in touch with these characters, and to bind the two timelines together.

I will admit that some of the revelations in this book hit me like a body blow, and made me realise that I had become a lot more attached to some of the more minor characters than I had realised.

THE BOOK OF LIFE

Bringing the magic and suspense of the All Souls Trilogy to a deeply satisfying conclusion, this highly anticipated finale went straight to #1 on the New York Times bestseller list. In The Book of Life, Diana and Matthew time-travel back from Elizabethan London to make a dramatic return to the present—facing new crises and old enemies. At Matthew’s ancestral home, Sept-Tours, they reunite with the beloved cast of characters from A Discovery of Witches—with one significant exception. But the real threat to their future has yet to be revealed, and when it is, the search for Ashmole 782 and its missing pages takes on even more urgency.

The Book of Life is an extremely satisfying conclusion to this trilogy. It really does feel as though the previous two books have been building to the hugely dramatic events of this book, and it has a much faster pace than the previous books.

Returning to the Bishop House, as well as to Sept-Tours, felt like coming home, albeit two very different homes. I had missed a lot of the modern day characters during Shadow of Night and enjoyed being reunited with them, as well as getting to know some newer faces. That said, I had been left heartbroken at the thought of never seeing some much loved characters again after the end of Shadow of Night, and so when certain faces (I’m not saying who) put in an unexpected appearance I was over the moon – I might even have shed a tear or two.

Given the size of each of these books, I was surprised at how quickly I read the whole trilogy – a sure sign that I am enjoying what I am reading. Now, if you’ll excuse me, I have a TV series to binge watch.

1 thought on “The All Souls Trilogy – Deborah Harkness”