I am delighted to be helping to kick off the blog tour for the audio book version of Visions of Zarua by Suzanne Rogerson. Many thanks to Suzanne, and to Rachel at Rachel’s Random Resources for inviting me to take part in the tour and for providing me with a copy of the audio book.

Two wizards, 350 years apart. Can they save the realm of Paltria from Zarua’s dark past?

An ancient darkness haunts the realm of Paltria.
Apprentice wizard Paddren is plagued by visions of a city on the brink of annihilation. When his master dies in mysterious circumstances, the Royal Order of Wizards refuses to investigate.
Helped by his childhood friend, the skilled tracker Varnia, and her lover Leyoch, Paddren vows to find the killer.
The investigation leads Paddren down a sinister path of assassins, secret sects and creatures conjured by blood magic. But he is guided by a connection with a wizard from centuries ago – a wizard whose history holds the key to the horror at the heart of the abandoned city of Zarua. Can Paddren decipher his visions and save the Paltrian people before the dark menace of Zarua’s past is unleashed?

Having discovered Suzanne’s Silent Sea Chronicles earlier this year and fallen totally in love with them, I was excited to see what Visions of Zarua had to offer. I approached this book with extremely high hopes and I wasn’t disappointed. Although narrated by a male narrator, I found that Suzanne’s signature style and writing voice resonated throughout, giving me, as a fan of her work, a familiar, welcoming feel that absorbed me instantly. Once again her exquisite attention to detail shines through, making you feel as though you are walking alongside the characters.

Visions of Zarua is a dual timeline book, and I found both timelines equally compelling. I was drawn to characters on both sides, and when I was reading about one set, I found that I was eager to get back to find out what the other group had been up to while I wasn’t looking. That is the downside of audio books for me – sometimes they just don’t move fast enough for me. Of course, with a book like this where I was desperate to see how the timelines were going to link up, the poor narrator would have to be a record breaking speed reader to go fast enough to satisfy me!

I am very particular about audio book narrators. They can make or break a book for me and I have abandoned some very good books purely because I couldn’t get on with the narrator. Guy Barnes has a gentle, easy to follow voice and I loved his characterisation of the different people we were introduced to. I also enjoyed the echo effect used to distinguish between reality and the visions that were experienced. My only issue was where there were scene changes within a chapter, which would probably have been marked by a gap in the text in a print book, there wasn’t always a terribly long break in the narration. As I was listening, I found that this sometimes meant the scenes ran into each other in my head, and I was confused about where I was and who should or shouldn’t be present. This didn’t put me off though, and I thoroughly enjoyed the book. 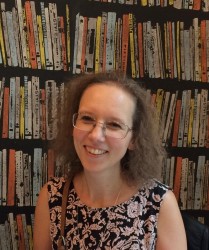 Suzanne lives in Middlesex, England with her hugely encouraging husband and two children.

She wrote her first novel at the age of twelve. She discovered the fantasy genre in her late teens and has never looked back. Giving up work to raise a family gave her the impetus to take her attempts at novel writing beyond the first draft, and she is lucky enough to have a husband who supports her dream – even if he does occasionally hint that she might think about getting a proper job one day.

Suzanne loves gardening and has a Hebe (shrub) fetish. She enjoys cooking with ingredients from the garden, and regularly feeds unsuspecting guests vegetable-based cakes.

She collects books, loves going for walks and picnics with the children and sharing with them her love of nature and photography.

Suzanne is interested in history and enjoys wandering around castles. But most of all she likes to escape with a great film, or soak in a hot bubble bath with an ice cream and a book.

Guy or the Big G as he is known to his friends is a London/ Brighton based actor and singer songwriter and producer.

He has recently completed his first leading role in the film Typo out next year and played the role of Alvin Turner in American film Holly Turner also out next year.

Guy only started narrating audiobooks last year and Visions of Zarua is his 2nd. He will be narrating 2 classics this year, Bram Stoker‘s Dracula and HG Wells The Time Machine.

In his spare time Guy is a passionate biker and cigar aficionado and he’ll not say no to a Sierra Nevada beer or two!

Don’t forget to have a look at the other blogs taking part in this tour.