Happy Publication Day to Hate Bale by Stephanie Dagg. I am so happy to be involved in the publication day activities for this book. Many thanks to Stephanie, and to Rachel at Rachel’s Random Resources for inviting me to take part, and for providing me with a copy of the book.

Grumbling guests and escaping piglets are precisely what Martha doesn’t need. She’s already struggling to run a holiday cottage and a rather large smallholding single-handedly. Since her husband Mark died, three years ago, her rural property in France, beautiful as it is, has become an increasingly heavy millstone around her neck.

So whilst she’s horrified to stumble across a corpse at the local farm supplies shop, it does at least distract her from her own woes. Best friend Lottie, the cheese to Martha’s chalk, swoops in to offer moral support, and encourages Martha to join her in some unofficial sleuthing. Meanwhile, police officer Philippe Prudhomme, a former fellow chess-player of Mark’s, undertakes a rather more professional investigation.

However, despite everyone’s efforts the killer remains at large. And when more bodies (one and a bit, to be precise) come Martha’s way, it definitely feels like he’s closing in on her…

There’s suspense, humour and excitement in this entertaining cosy mystery set in the French countryside.

You can order your copy of Hate Bale here.

Just recently I seem to be hearing people talk about the cosy mystery genre more and more, but I didn’t really understand what it was if I am being entirely honest, so when the opportunity to take part in the publication day for this book, I grabbed the opportunity to discover a new genre. It turns out that I am a fan. I often read fast-paced crime thrillers that keep you on the edge of your seat, but I found that I thoroughly enjoyed the slower pace of this book. Yes, there were bodies piling up around Martha (sometimes in particularly imaginative ways), but at the same time there was a warmth about the writing, and there was a touch of humour throughout.

I fell in love with adoring Phillippe, and equally adoring pooch Flossie, and I loved that the wayward livestock on Martha’s smallholding was injected with just as much character as the humans were.

I found that I couldn’t take to Lottie at all. She is exactly the sort of person who would instantly rub me up the wrong way and I found reading about her quite jarring. However, I think this was perhaps the point of the character, to act as a counterbalance to Martha’s sweet nature and to prevent the book becoming too sugary. The vast differences between their characters certainly make for a quirky partnership, and I can quite see them getting a taste for investigating and crime-solving in rural France, with their poor loyal policeman following them around and attempting to keep them in check.

As I am sure many people do, I often dream of escaping to a rural idyll, somewhere in the peaceful European countryside, and whilst my own dreams lean more towards France than Spain, I love the idea of running a smallholding with a holiday cottage attached. Obviously, as this book shows, the reality is somewhat harder than the dream, but it was still so attractive to me that I would have happily upped sticks and moved to France to help Martha. 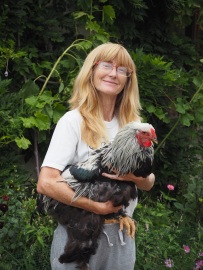 I’m an English expat living in France, having moved here with my family in 2006 after fourteen years as an expat in Ireland. Taking on seventy-five acres with three lakes, two hovels and one cathedral-sized barn, not to mention an ever increasing menagerie of animals, has made for exciting times. The current array of creatures ranges from alpacas to zebra finches, with pretty much everything in-between! Before we came to France all we had was a dog and two chickens, so it’s been a steep learning curve.

I’m married to Chris and we have three bilingual TCKs (third culture kids) who are resilient and resourceful and generally wonderful.

I’m a traditionally-published author of many children’s books, and am now self-publishing too. As well as being an author, I’m also a part-time editor and, with Chris, manager of three carp fishing lakes. My hobbies are cycling, geocaching, knitting and sewing.