I have another great book for you today. If you like YA, with a little bit of mystery and intrigue thrown in, you can’t go too far wrong with Wunderkids (Part One: Wildwood Academy) by Jacqueline Silvester.

15-year-old Nikka is invited to attend Wildwood Academy, a prestigious but secret boarding school for talented youth located deep in the Californian mountains. Once there, Nikka quickly falls in love with her bizarre classes, the jaw-dropping scenery and… two very different boys.

Nikka can stay and lose everything, or she can risk death and run.

As a Harry Potter fan, any book featuring a mysterious boarding school hidden away from prying eyes is a must read for me. When you add welcome snacks of elderflower lemonade and mint macaroons to the equation, I am packing my bags and enrolling myself!

Although all the standard YA components are present in Wunderkids, the clueless young girl entering a world she knows next to nothing about, the potential love triangle, the bitchy rival student, Jacqueline Silvester’s writing is such that there is no feeling of triteness in the story. The characters, whether students, teachers or townies, are all so well developed that you are drawn deep into their world with no choice but to tag along for the ride.

Jacqueline weaves a delicate web of secrets and lies, and in a place where even the school nurse has something to hide, it becomes impossible to know who is a friend or an enemy, or even what is real or fake.

Keep an eye out for the Halloween party – discos were never like that where I went to school!!!

I thoroughly enjoyed this book, and can’t wait for the next part to be released. Without wishing to give anything away, this first instalment ends in the perfect way to keep you hanging with baited breath for the sequel. 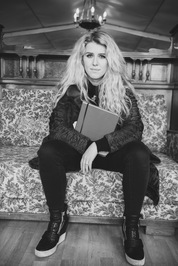 Jacqueline has had a colourful and dual life thus far; she’s lived in a refugee camp in Sweden, a castle in France, a village in Germany, and spent her formative years in between Los Angeles, London and New York. As a result, she speaks four languages. Jacqueline has a Bachelors in English Literature from the University Of Massachusetts, and a Masters in Screenwriting from Royal Holloway, University Of London. After graduating she wrote her first novel and began writing cartoon screenplays. The two years she spent in an arts boarding school in the woods have inspired the particular world described in her debut novel Wunderkids. She lives in London with her husband, her excessive YA collection and a hyper husky named Laika.

Wunderkids has been translated into a number of languages and featured in Vogue magazine!