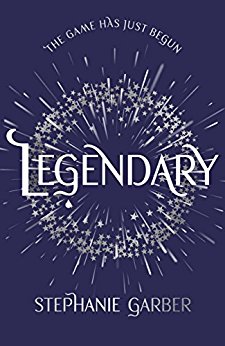 I am a massive fan of Stephanie Garber’s debut, Caraval, so, as my friends could tell you, I was more than a little excited to get my hands on this little beauty. The enticing world of Caraval is full of magic that is both wonderful and terrible in equal measure. The vivid descriptions of the world that the mysterious Legend creates draw you in and make you wish that you could join the game, but at the same time make you pray that you never find yourself there. In a world of games and make believe, you can drive yourself crazy trying to make sense of what is real, and what is just a performance for the participants.

Legendary starts just hours after the end of Caraval, but although the game is over, it is still impossible to tell who can really be trusted and who is playing a role. Told from Tella’s point of view, the new game of Caraval, held in honour of the Empress Elantine, has an altogether darker feel. Set in the very real streets of Valenda, rather than a magical world of Legend’s creation, it becomes harder than ever to know what is real and what is just part of the game. This lends a sinister air to the whole book, and creates an even higher level of tension.

Whilst Scarlett remains my personal favourite of the sisters, this book would not have worked if she was the one playing the game. I find that Tella comes across as somewhat conceited, but it is her impetuous nature that is essential for the game to play out as it must.

Stephanie Garber’s world building, with its beautiful descriptions and fatally flawed characters, draws you into the book, much as the Dragna sisters were each drawn into the game of Caraval, and leaves you doubting whether you can truly believe what you have read. All I can say is, I hope there is a third book to follow this one, because I have many, many questions that need answers! Now, if I can just track down my very own Deck of Destiny…