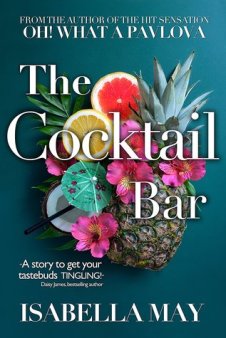 Rock star, River Jackson, is back in his hometown of Glastonbury to open a cocktail bar… and the locals aren’t impressed.

Seductive Georgina is proving too hot to handle; band mate, Angelic Alice, is messing with his heart and his head; his mum is a hippie-dippy liability; his school friends have resorted to violence – oh, and his band manager, Lennie, AND the media are on his trail.

But River is armed with a magical Mexican elixir which will change the lives of the Three Chosen Ones. Once the Mexican wave of joy takes a hold of the town, he’s glad he didn’t lose his proverbial bottle.

Pity he hasn’t taken better care of the real one…

While I try to avoid judging a book by its cover, it is almost impossible with The Cocktail Bar, as it just screams “Read me!” the second that you see it. The beautiful colours grab your attention and set your imagination, and your taste buds, running at full speed. Even better, once you step through the front door of The Cocktail Bar, the story itself more than lives up to the cover.

Isabella May’s beautiful descriptions of the locations in this book make you feel as though you are right there next to River, experiencing the exhilarating sights, sounds and even smells as he starts out on his adventure in Mexico.

As the action moves back to River’s hometown of Glastonbury, the story unfolds with just the right sprinkling of magic and wonder that I had hoped for in a book set in a town that I have always wanted to visit but haven’t yet made it to. Having read this book, I now want to go there even more than ever, and I just hope that they have a decent cocktail bar for real.

I fell in love with every character in this book, from the delightful Alice to the devilish Georgina, from cat crazy Cassandra to fierce taxi-driving Hayley. As you read this book, and get to know each of the characters, you just know that you want to be in their gang, sharing one of River’s amazing cocktails.

This book is a must for anyone with a fondness for cocktails, love, and the magic that being surrounding by true friends can bring.

Well, after all that alcohol, I think I need some food now, so I am off to read Isabella’s first novel, Oh, What a Pavlova, whilst I eagerly await her next culinary offering.