Do you remember when you believed in magic?

The Emporium opens with the first frost of winter. It is the same every year. Across the city, when children wake to see ferns of white stretched across their windows, or walk to school to hear ice crackling underfoot, the whispers begin: the Emporium is open!

It is 1917, and London has spent years in the shadow of the First World War. In the heart of Mayfair, though, there is a place of hope. A place where children’s dreams can come true, where the impossible becomes possible – that place is Papa Jack’s Toy Emporium.

For years Papa Jack has created and sold his famous magical toys: hobby horses, patchwork dogs and bears that seem alive, toy boxes bigger on the inside than out, ‘instant trees’ that sprout from boxes, tin soldiers that can fight battles on their own. Now his sons, Kaspar and Emil, are just old enough to join the family trade. Into this family comes a young Cathy Wray – homeless and vulnerable. The Emporium takes her in, makes her one of its own. But Cathy is about to discover that while all toy shops are places of wonder, only one is truly magical…

Every now and again a book comes along that takes you by the hand and pulls you down into the pages, refusing to release you from it’s spell until the very last page. The Toymakers is one such book and I was captivated from the very first page. Dinsdale’s beautiful descriptions and style of writing made me feel as though I was right there in Papa Jack’s Emporium, and, as Papa Jack’s toys work their own special magic, I felt a sense of anticipation reminiscent of my own childhood Christmases. From the second I was introduced to the Emporium, the book lit up a childlike wonder in me, just as Papa Jack’s toys in the adults that loved them as much as the children that they were bought for. The real world fell away, and I was lost in a world of imagination.

The book follows runaway Cathy Wray as she discovers the wonderful world of Papa Jack’s Emporium, and builds a new life for herself among the toy-filled aisles, aided by the charming Godman brothers. Papa Jack’s boys couldn’t be more different from each other. The only things that flamboyant, charismatic Kaspar and sweet, gentle Emil have in common are their adoration of Cathy and a burning desire to make toys as good as their father’s. The outbreak of World War One changes everything, and just as it stole the innocence of the boys who went off to fight, so too did it steal the joy that lived inside the Emporium. As the magic begins to fade, desperate measures are taken that change the face of the Emporium forever.

The Toymakers left me with an overriding sense that even in the depths of despair and devastation, there is still magic to be found. The magic of Papa Jack’s Emporium lives on in all of the children whose lives the toys touched, and will live on in all of us, for as long as we have books like this, and, of course, our own imaginations. 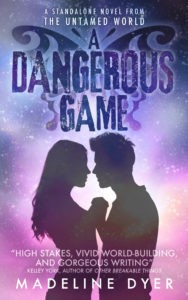 LOVE WAS NEVER SUPPOSED TO BE EASY…

All her life, Keelie Lin-Sykes has known what she wants: to protect her brother and sisters by killing as many of the soulless Enhanced Ones as she can. Oh, and to have fun while she’s doing it. After all, hiding in a secret Untamed community, while the group’s Seer warns them of danger, shouldn’t mean that life can only be serious, right?

But, when a face from her past suddenly–and secretly–shows up, Keelie’s catapulted back into the very world she’s been trying to escape from for the last ten years: a world full of guilt, lies, and…love. And the deeper Keelie gets into this world, the bigger the risks become.

Now, Keelie must deceive those she values most in order to protect them, even though her actions will destroy everything she knows and haunt her family forever. But she can’t ignore her feelings–not again. And Keelie will do anything to be with the man she loves.

“Dyer gives us a strong heroine, high stakes, vivid world-building, and gorgeous writing all wrapped up in one package… What more could you ask for?” — Kelley York, author of OTHER BREAKABLE THINGS.

I’m just going to come right out and say it. I love Madeline Dyer! I was first introduced to her books a little over a year ago and I have been hooked ever since. Her Young Adult dystopian Untamed series had me hooked from the first page.

For those unfamiliar with the series, the Untamed live in a world where addiction to chemically produced augmenters is encouraged, and those who choose to remain “Untamed” are actively hunted, and forcibly converted to become Enhanced. The upside – no more illness or painful emotions. The downside – you become a shell of your former self, devoid of humanity. The Untamed survive by staying hidden and carrying out raids on the Enhanced towns.

A Dangerous Game is a standalone novel, set in the Untamed world, but sitting just before the events of the series, and with a brand new protagonist. Fans of the Untamed series will be pleased to see Seven Sarr and her family make an appearance, but I am confident that they will love Keelie Lin-Sykes just as much.

Keelie is older, angrier and more cynical than Seven, and this grittier approach gives the whole book a more grown up feel. Left alone with her twin brother, Elf, autistic older sister, Bea, and the baby of the family, Mila, after being separated from her parents and best friend during an Enhanced attack, Keelie will do whatever it takes to protect what is left of her family, and keep them together. This determination can lead to her making some unwise decisions and placing herself in danger. When a familiar face reappears, Keelie is left not knowing who or what to trust.

Seeing characters that I was already familiar with through Keelie’s eyes changed how I saw some off them, and helped build a bigger, more rounded picture of the community. The inclusion of an undiagnosed autistic character adds an interesting dimension as she struggles to cope in the ever changing, frightening, and dangerous world that the Untamed live in.

You don’t have to have read the Untamed series to love this book. it is an emotional rollercoaster all of its own, and the end left me reeling (no spoilers here, you’ll just have to read it). That said, if you haven’t read the series, you really should. You have a few months to catch up before the fourth and final instalment is released later this year (watch this space for more info!)

Add this book on Goodreads