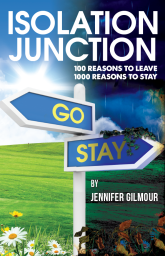 Ice cold rain splattered her face; her toes and fingers were numb and yet she sat there huddled up and gently rocking herself. It was a black night with no stars, like someone had just switched off the sky. The only light shining on her face was the orange glow of a single street light. Rose couldn’t cope anymore, she was crying into her hands so hard it hurt her heart; it was a deep spike of a pain rushing through her body and this wasn’t the first time she had felt it.

Rose is the mother of two young children, and finds herself living a robotic life with an abusive and controlling husband. While she struggles to maintain a calm front for the sake of her children, inside Rose is dying and trapped in ‘Isolation Junction’.

She runs an online business from home, because Darren won’t let her work outside the house. Through this, she meets other mums and finds courage to attend networking events, while Darren is at work, to promote her business.

It’s at one of these events that Rose meets Tim, a sympathetic, dark-haired stranger who unwittingly becomes an important part of her survival.

After years of emotional abuse, of doubting her future and losing all self-confidence, Rose takes a stand. Finding herself distraught, alone and helpless, Rose wonders how she’ll ever escape with her sanity and her children. With 100 reasons to leave and 1,000 reasons she can’t, will she be able to do it?

Will Tim help her? Will Rose find peace and the happiness she deserves? Can Rose break free from this spiralling life she so desperately wants to change?

When I start reading this book, I was concerned that the subject matter would make it a difficult book to read, that it would be depressing and upsetting. However, this is not the case at all. Jennifer handles the content sensitively, and although you can feel Rose’s desperation, the way in which the book moves from the present day to flashbacks of the abuse that Rose suffered, means that there is a feeling of hope running throughout the book.

Isolation Junction is such an important read for anyone who finds themselves in an abusive relationship as it shows that there is help available, and a light at the end of the tunnel, no matter how dark things may seem. I (thankfully) have never found myself in a situation anything like Rose, and this book was a real eye opener for me. Before reading it, I would have said that I didn’t know anyone who had been in an abusive relationship, but now I recognise a lot of what was going on with a friend back when we were in our early twenties. There is so much emphasis on physical abuse that I think people forgot about the mental abuse and coercive behaviour that a lot of victims suffer at the hands of their abuser.

Please read this book and help spread the messages that it contains.

Note from the Author:

Isolation Junction was fully funded by a Kickstarter Campaign which over funded at 110%.

Over eighteen months within 2015-2016 I wrote my first novel with the aim of not only raising awareness of an insidious behaviour which brings hidden misery to so many but of bringing about changes at a national level.  A ‘survivor’ myself, I am well aware that changes to national policies and working practices are still needed so that situations in which women (and men) present in emotionally abusive situations are recognised and dealt with appropriately and with compassion.

I believe that particular training needs to be focused on recognising the perpetrators of this behaviour, as often they are very persuasive people who are able to manipulate the services themselves.